September 01, 2013
There's still a lot of work to do to get the rift running smoothly, specifically I can't seem to get the thing to focus properly in fullscreen mode (but works great in windowed!). 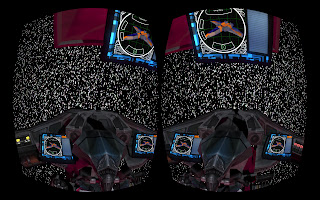 I found the SDK alright, but a little basic.  The examples and API itself use a RH (right handed) coordinate system, which is not what DirectX uses, and I wish they supported both out-of-the-box instead of me having to map between them. "Oh here's a quaternion providing the headset rotation, but it needs its coordinate system remapped"..uh-huh.  Oh yeah, some documentation on using the rift with DirectX would be nice!!  OR am I the only one using DirectX these days? 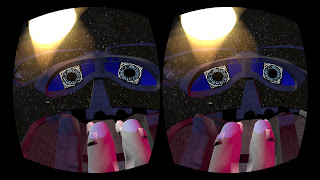 In order to render for the rift, you need to draw your scene twice, with the camera offset by the distance between your eyes.  It's nice and easy, as the geometry of the rift lenses is such that you don't need to skew or rotate your projection matrices, it's just a translation.  However, drawing the scene twice obviously incurs a performance hit if you're not careful.  Thankfully the Stingray Engine I built for Pegwars builds up command buffers for drawing, meaning you can re-render just the scene's draw commands from two perspectives - without duplicating any setup work.  Nice!  My only problem right now is I'm creating light-maps twice, which obviously can be reduced down to just once per frame.  But overall, I was very happy with the rift rendering performance... certainly much faster than 50% of the single-view frame-rate!

I must say, it's pretty special to sit in a virtual 3D spaceship cockpit!

I've made a lot of progress recently focusing on refining my procedural planets and atmospheres.  Added into the mix are multi-core particle systems, procedural nebula and AI.  I'm almost ready to post videos but am excited that I have now fully tied in the galaxy to the rest of the engine, meaning totally seamless travel between every star in the galaxy all the way from warp-drive-speeds down to landing on and running around planets in first-person.


Some kind of desert planet, looks a little bit like Australia!

Here's a shot of my prototype cloud system.  The clouds are image based, the idea being to use a particle system or maybe cellular automata on the GPU to create procedural cloud maps for each planet.  The clouds are incorporated into the atmosphere scattering shader, meaning that they get nice sunset lighting and they also cast shadows into the atmostphere.  Plus you can place objects in, and fly th…
Read more