June 14, 2016
I've made a lot of progress recently focusing on refining my procedural planets and atmospheres.  Added into the mix are multi-core particle systems, procedural nebula and AI.  I'm almost ready to post videos but am excited that I have now fully tied in the galaxy to the rest of the engine, meaning totally seamless travel between every star in the galaxy all the way from warp-drive-speeds down to landing on and running around planets in first-person.

Some kind of desert planet, looks a little bit like Australia! 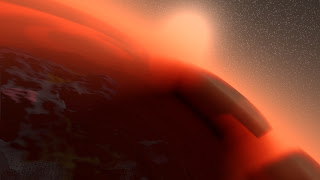 Here's a shot of my prototype cloud system.  The clouds are image based, the idea being to use a particle system or maybe cellular automata on the GPU to create procedural cloud maps for each planet.  The clouds are incorporated into the atmosphere scattering shader, meaning that they get nice sunset lighting and they also cast shadows into the atmostphere.  Plus you can place objects in, and fly through the clouds seamlessly.

Flying down to and then crash-landing on a planet somewhere

Showing off the procedural moons as well as planets

Taking a cruise early in the morning

This solar system has a dark sun, making everything gloomy and spooky

Looking up at the sun from a crater on a moon

Taking off from some kind of pink-crystals planet

This planet has a huge crater lake on it

A valley of forest in a grove of crystals 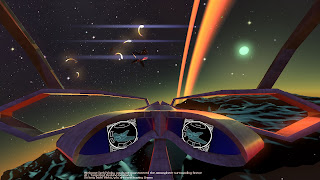 Now that I have AI spaceships and have implemented combat, the game is starting to feel like a real game more than a space sandbox!