Your Oculus Order is AboutTo Ship 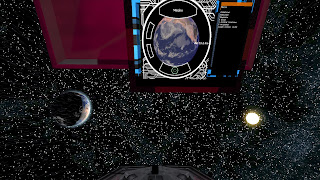 - User Interface now working, displays on consoles in virtual cockpit.  From day 1 I've tried to stay away from on-screen UI, and I think that'll be vindicated when using the Oculus.  Immersion is key!
- 'Star trails' object which is not really star trails, but a detail object that helps give the impression of movement and speed in what is essentially a very large, empty space.  50000 points wrapping and extruding and drawing in a single batch on the GPU
- The stars you see in this shot are now drawn by the galaxy class, which is an octree of solar systems.  And although it's hard to show in a screenshot, you can fly to every single system seamlessly using a combination of your turbo drive and turning off the engine stabilisers...
- I need to start creating procedural planet textures!  Planet named 'Masjou' but using Earth texture just won't cut it.

Now one more screenshot that is Oculus Rift focussed...looking down at your own knees in the cockpit! 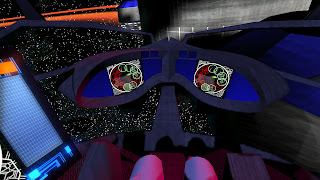 - In-cockpit head-look is what pegwars has always been about, and that feature is really gone to shine with the Oculus Rift, it's really going to be the perfect match
- This shot shows the new UI again, this time the Control Centre system - with badly arranged overlapping system icons.  Every icon is a ship system, we've got (from centre-right, anticlockwise) Targetting, Radar, 2 Pulse lasers, 4 thrusters, nav computer, fighter bay and engine stabiliser.  Currently the thrusters and stabiliser are turned off because I've docked at the space-station :)
- Badly focused shadow-maps.  However ... they are at least working, like all of this stuff...needs polish!