Stingray is organised into a Channel strips. Each has a list of RenderChannels, and each of these have a list of DrawCommands. 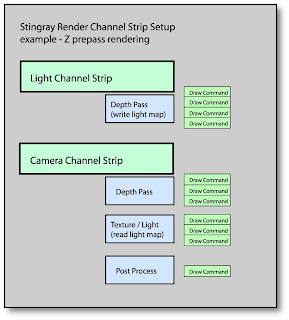 game programmer. This design means that a Stingray game is not bound to forward-rendering, or deferred-rendering, single or multi-pass materials etc. It is completely flexible from this standpoint.

The fundamental drawing unit in Stingray, the DrawCommand, exists so that all draw commands can be sorted with respect to one another. This allow 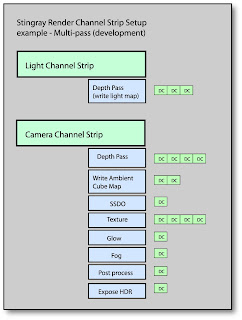 Mesh files contain a list of MeshPieces - parts of a mesh that have the same material.

Material files contain a list of RenderChannels that draw a mesh piece, for example texture, light, then post-process. For each render channel, XML invokes class factories to create DrawCommands. This means a material may contain passes that are not used by a particular game; if a game only implements some render channels, then parts of the material simply won't be bound at runtime. Thus we have a dynamically-bound multi-pass material system.

When a mesh is bound(), all its mesh pieces use their materials to register draw commands to the appropriate r 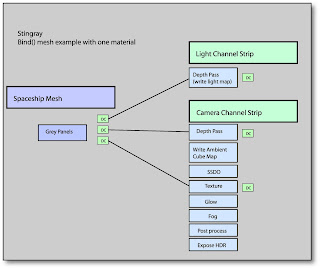 All resources are referenced by integer IDs and stored in Managers, thus any resource can be reloaded at runtime, and the instance memory is kept to a minimum.

Stingray uses Boost::Python to expose nearly all of the engine to Python. There is no inherent render pipeline, this is created by the game python scripts.